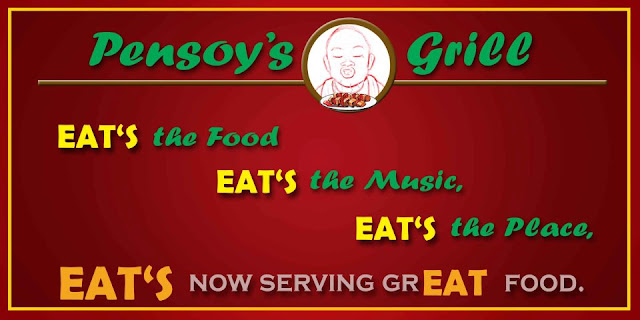 At Pensoy’s Grills, the new rule is…. “EAT’s the food, EAT’S the music, EAT’s the PLACE…Eat’s Now Serving grEAT Food.”  This is an internal  part of Mr. Big Shot, and was known as Six Blings before (though far different as old). Thomas Bebot Haw, founder of Haw’s of LechonniMangThomas, and his partner are the forces behind the Pensoy’s Grill.
Eat’s the Place
The place comes with a smart look of new lightning and other touches. More important, the owners really overhauled the place.When you look around you can see crocodile remains near the stage, heads, bones and tail of biggest tuna on the wall and skeleton of the ostrich.
One of shoebox-shaped function rooms – Six Blings blossomed into a nice setting wherein some frames of popular athletes who once made a success in sports are featured like Paeng Nepumocimo, Micheal Schumacher – German Formula One driver for Mercedes team and seven-time World Champion, Micheal Jordan, Manny Pacquiao and many more.  Badminton rackets, bicycle and other sports gears are hanging nicely on the ceiling.
Another function room called Karagatan, has covered of glass and bamboo walls with a cartoonish tuna fish in bright colors hanging behind the buffet table. A skinny long table runs down the middle while  paintings hugging the wall.
Eat’s the Food
In Gensan, you can hardly even find a restaurant that served ostrich and crocodiles in one place. The Pensoy’s Grill seems to handle the challenge well, though ostrich and crocodile are least impressive animals for me, but once cooked they are fine, I mean they are generally great to eat.

With their new menu, the choices are endless, highlights to include are the ostrich steak, galante ostrich burger and crocolicacies such as crocosisig, crocostrich, crocochile and a lot more.  Thanks to a food enthusiast partner Moppet who also works as a Food Planning and Standards Specialist for PAL and part of her work is to check the dishes served for both the MCL and Economy passengers.  So before you plunge right in the resto, just know what you want, or else you might be missing the specials, as a full-sheet list of the menu might excite you a lot.

Welcome to Food Nirvana!!!
If you have to ask me, I stick with their specialties and what’s most unusual. This includes the Ostrich Steak with super yummy sauce. The Ostrich Molu Soup (P140), and the SayangDilikaGuaPo (P120) – the most creative (controversial) name. Hmpf!!! Buti nalang masarap ka. :))  SayangDilikaGuaPo consists of Pasayan (Shrimp) Dilis, Guava, and Pomelo.
But wait- the menu is not all ostrich and crocolicacies, all the time. They offer sumptuous cuisines like Molu Soup, Cream Dowry Fish Fillet, Buffalo Wings (P240), Kare – Kare (P240), Crispy Pata (P380) – where meat is golden brown and crunchy. And oh, their Condoleezza Rice (P180) is kind of perfect too. 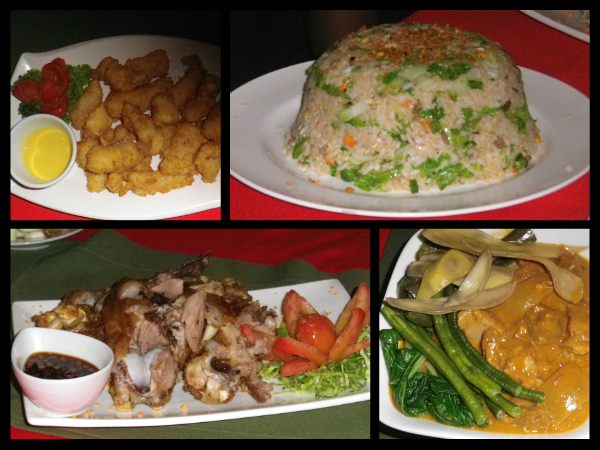 Service is a big plus, fast on the uptake, waiters are cordial. At the end of the meal, music and drinks awaits for you.
Eat’s the Music
Pensoy’s Grillis wide awake every night as  the live band is  a new addition to the scene. Stop in for a night and enjoy their double chilled beer.
The location: NCCC compound national highway, 9500 General Santos City, Philippines
Details: Open from Monday to Saturday  3pm. to 12am. Parking lot is not a problem.
FB Page: https://www.facebook.com/PensoysGrill
For reservation: Contact Pensoy’s Grill at 0922 803 1961.
Tags: General Santos City, Gensan City, Gensan City foods, Gensan City Mindanao

SM SuperMarket Gensan – At Your Service!