Skip to content
After few hours of swimming, cam whoring, teasing and running in Pujada Island, our pump boat operators gladly convinced us to include Isla Puting Baaasss to our itinerary.  As curious as we are, plus we’re on the hunt for exciting adventure, we headed to the island.
People called this island as Isla Putting Baasss, which means White Island. It is a bit similar to popular White Island in Camiguin; however, this Mati City version is only known to locals in Davao Oriental and neighboring provinces.

From Pujada Island, we rode pump boat and traversed for about 30 minutes. As we get closer, the driver pointed out the small island. It was halfway covered by giant waves, at that moment I think about my safety, my life in case the waves eat us since we don’t have any life jacket.  When I confessed that to my companion, she smiled and uttered flashback of your memories. 😀 In order to avoid being attacked by monster waves, our driver waited for right timing, so we can reach the shore. At the same time, we are preparing to jump on the shore ala ninja moves. 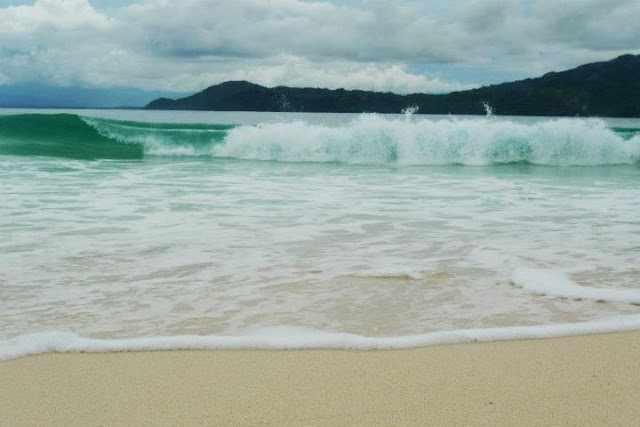 This island is facing Pacific Ocean, so be ready with giant waves want to devour and spoil your pictorial moments. 😀 but this case never disappoints us. As we had the island for ourselves; we felt unmatched and childlike excitement, according to Izza – the scriptwriter of the group.
How to Get There: The island is a popular place to rest for local fishermen. It means you are safe to approach them to bring you to Isla Puting Bas. They only ask you to shoulder the gasoline, but you can give them a bonus, for they are really good in entertaining travelers and tourists.
Tags: adventure in Mati City, Davao Oriental, Mati City travel guide, Mati Davao Oriental, tourist spots in Mati City, what to do in Mati City, White Island Mati Davao Oriental