Skip to content
A retreat from the smoke and pollution with the noise and busy streets in the urban is what we would plan for even at least once a year, right? And it’s quite common to go to the beaches; you may have escaped the busy streets of the city but you’ll experience traffic with the crowded places in the beach. Why not try something that is different? Something that you can really call a retreat.
Spreading out to an eighty hectare land, the Eden Nature Park of Davao City can be lined up with the best nature parks in the world. This park is 95% man – made, something that Davaoenos are very proud of. Having a seat at the foot of Mt. Talomo, Eden has a very well temperature that is comparable to as that in Baguio and Tagaytay. This nature park is settled at 2,650 feet above sea level and has a nice view of Davao City. It certainly is a nice getaway!
Wouldn’t it be nice to be in tranquil with nature? The feeling of living in a forest where the cold air you’ll feel is not from the air conditioned units in your room but rather the cold fresh air that comes naturally from the trees surrounding you. Imagine the thought that you wouldn’t need your hanky to cover your nose from time to time because of the smoke belching cars. Eden not only gives you the feeling of at peace with nature, it also has different forms of enjoyment you and your family or friends will surely love. 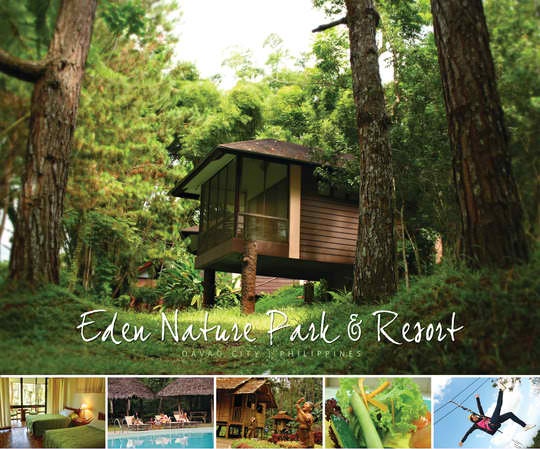 Eden is also known to have organically grown vegetables right at their own backyard. Experience their sumptuous meals offered at their restaurant with this fresh veggies to add up to their menu. Enjoy the stunning array of tropical flora, thousands of pine trees and other plants on this nature park stretch. Other sightings you’ll see here, are the Amphitheater, Flower Garden, Lola’s Garden, Mayumi’s well and Plaza Maria.
This nature park is not at all purely nature. You can also have your own dose of adventure here at Eden. You can ride along with the rope at the Indiana Jones or experience what it feels like to be above the ground at least some feet up with only a gliding stuff and some straps to hold you, with their version of zip line called Sky Rider. Or perhaps you would want to trek their mountain trail for a seemingly Mt. Apo climb, where you’ll pass by their hanging bridge and some waterfalls.
The Eden Nature Park also pays tribute to the Mindanaoan ancestors by making them their statutes and showing off some of their traditions as seen in Tinubdan.
They also have other amenities which include swimming pools and playgrounds for children. Cottages are also available should you wish to stay for a night or two. They also have their business center with a wifi access, souvenir shops and function areas.
The Eden Nature Park is located at Bayabas, Toril Davao City. They have their office at Matina  Town Square, which you may book yourselves for a trip to and from Eden.
Tags: Davao City

Where to Eat in Davao:Zabadani Cafe and Restaurant